A Sacred Calling as a Sacred Role

A Sacred Calling as a Sacred Role 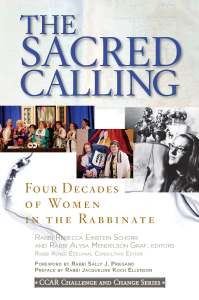 “My Judaism encourages me to focus on a personal relationship with God, to know myself, and to know God; to use my skills and strengths in making the world a better place. I think it’s a universal mission and has nothing to do with gender. I think Judaism encourages us to think about what everybody’s sacred role is.”

The Sacred Calling: Four Decades of Women in the Rabbinate, newly published by CCAR Press, examines the ways in which the reality of women in the rabbinate has impacted upon all aspects of Jewish life. Upon the publication of The Sacred Calling, we sat down with (now Rabbi) Toba Schaller, approximately the 760th woman to be ordained by Hebrew Union College – Jewish Institute of Religion and 5th year rabbinical student at the time of the interview, to discuss the impact of women in the rabbinate upon a woman and mother about to embark on her own journey as a newly ordained clergy member.

Q. What made you decide that you wanted to be a rabbi? In other words, what was your sacred calling?

A. I grew up in rural Texas in a very small Jewish community. I went to Jewish summer camp and I studied Jewish studies and anthropology at the University of Texas at Austin. After a few years, I found myself in my twenties not knowing what I wanted to do and working as a cocktail waitress at a bar. I became friends with the daughter of the bar owner, who was eleven years old. She started asking me questions about Judaism. Her father asked me if I would pick her up from school one day a week and formally teach her Jewish values, Jewish culture, and basic Hebrew. I then found myself asking for Friday nights off of work so I could take her to synagogue and to family holiday events with me. At some point I said to her, “How did this happen? If you had asked me before, I would have said I was living a totally secular life.” And she said to me, “You talk about being Jewish all the time, and you love Judaism.” She told me that other waitresses in the bar talk about their boyfriends or what’s on TV, and that she heard me debating the value of faith in the world with customers at the bar. I think she really helped me realize that the Torah was in me, whether I recognized it or not, and that what I really love to do is talk, think, and do Torah. After the next few years of working in the Jewish community, I knew that I was ready to be a student instead of a teacher: I was ready for rabbinical school. I was twenty eight when I applied to rabbinical school.

Q. What interested you most in The Sacred Calling and why?

A. Something I appreciated in the history of women in the rabbinate was the lesson about the importance of mentorship in successfully bringing people in from the margins, as well as the importance of membership to the overall success of new clergy members. I feel really lucky that I have had such wonderful mentors at HUC-JIR, and now through the CCAR, as we head into the field.

After reading The Sacred Calling, I feel really lucky to have been given different models for what a rabbinic career can look like. The book has allowed me to see myself as a mother and a woman and a rabbi much more easily.

Q. Debra Reed Blank talks about “the tension between feminism and Judaism” in her chapter, “Making Up for Lost Time: Female Rabbis and Ritual Change” (p. 433). Do you think that this tension is inherent in Judaism or was it developed and encouraged as an interpretation of Judaism by groups trying to keep the power contained within the constraints of their own system?

A. I don’t think there’s tension at all between feminism and Judaism. I have found that my feminism is really informed by my Judaism and vice versa, and I haven’t found conflicts in the Judaism that I know and that I experience. I have seen it in other forms of Judaism, and in other ways of practicing Judaism, but, ultimately, I think that any challenges between feminism and Judaism come from the way Judaism is interpreted, and are not inherent to the religion. I find Judaism really empowering.

Q. There is a chapter in the book by Denise Eger titled “Creating Opportunities for the ‘Other.’” Rabbi Eger talks about the mere act of ordaining women as an important contribution to the inclusion of the “other” in Judaism. What do you see as the next challenges to be met in the struggle towards equal rights in Judaism? What are the next barriers and how do you envision breaking them?

A. I think we’ve come a long way when it comes to the LGBTQ community. We’ve become much more open to queer identity. But we’re not all the way there, and we still have a long way to go before we are really open to people who don’t fit the gender binary.

We’re working on it at HUC-JIR and, for the first time, at least since I’ve been there, we have a gender-inclusive bathroom, which seems like a little thing, but took a long time. It’s a huge step in the right direction, but, as I said, we still have a long way to go.

I am personally really active in working towards inclusions for interfaith families in the places that I work. This, I know, is the big talking point of the movement right now, but it has been for a really long time, you know? Alexander Schindler put it on the agenda in the ‘70s and ‘80s, and it’s still something that we haven’t figured out how to do fully. I look forward, in my rabbinate, to working on inclusion. I want to make sure that people on the edges of our community are welcome.

I think The Sacred Calling can help us think inclusively; I think there are lessons in the book from the women who fought their way to leadership roles and, in so doing, taught us to bring other marginalized groups into the center. And I think that women have come a long way, but we’re not all the way there yet either, and that perspective helps us to be more inclusive of other members of our community.

Rabbi Toba Schaller, former rabbinical intern at WRJ, graduated from HUC-JIR in 2016 and is now Rabbi and Director of Lifelong Learning at Congregation Emanu-El B’ne Jeshrun of Wisconsin.

Excerpted from the official book trailer of The Sacred Calling: Four Decades of Women in the Rabbinate.  Watch the trailer now.

This blog originally appeared on RavBlog.

How a Louisiana law could undermine abortion access across the country