Abraham Geiger College, one of WRJ’s YES Fund recipients, asked WRJ to send a representative to Berlin for the 80th anniversary commemorative events of Kristallnacht, including special services, concerts, art exhibitions and panel discussions. It was my honor to be representing WRJ at these events.

We began the day with Rosh Chodesh Kislev services organized by Abraham Geiger College. The service was led by a graduate of the cantorial program, a current cantorial student, and one of WRJ’s grantees at Geiger College, rabbinical student Jasmin Adriani.

This was the first time that Geiger College had offered a Rosh Chodesh service. The Torah was placed on a table in front of a large picture window—we could see the Jewish high school across
the road and people were looking in as were praying. I was honoured with an Aliyah and Torah was chanted in full voice. The irony was not lost on anyone that this day, in particular, was the 80th commemoration of Kristallnacht. As 1 Kislev is my mother’s Yahrzeit, it was especially heartening to honour my loving mother while celebrating religious freedom in Berlin, on this particular day of remembrance.

Afterwards, we headed to the Rykestrasse synagogue, located in the eastern part of Berlin, for the official government commemorative service. The Germans do not refer to November 9, 1938 as Kristallnacht, but rather as Reichpogromnacht as more than glass was broken that night. There were vast pogroms that included setting fire to synagogues, homes and businesses of Jews as well as beatings and killings across Germany and Austria. The Rykestrasse synagogue was not burned to the ground, as it is located in a courtyard surrounded by houses and there was concern that the fire might have spread through the neighbourhood. The interior of the synagogue, however, suffered great damage.

During the service, representatives from the Jewish community of Berlin and of Germany spoke; a choir sang; Chancellor Dr. Angela Merkel delivered the major address; and Cantor Isaac Sheffer of the Pestalozzi synagogue sang a haunting and chilling “El Male Rachamim” before we all recited Kaddish. It should be noted that also in attendance were the President of Germany, the Foreign Minister of Germany, two former German Presidents, and leaders of the main political parties. It was an honour and a true privilege to be in attendance, representing WRJ. It was a memorable service for the setting, the speakers-especially hearing the words of Chancellor Merkel, and the Cantor’s rendering of all who perished. 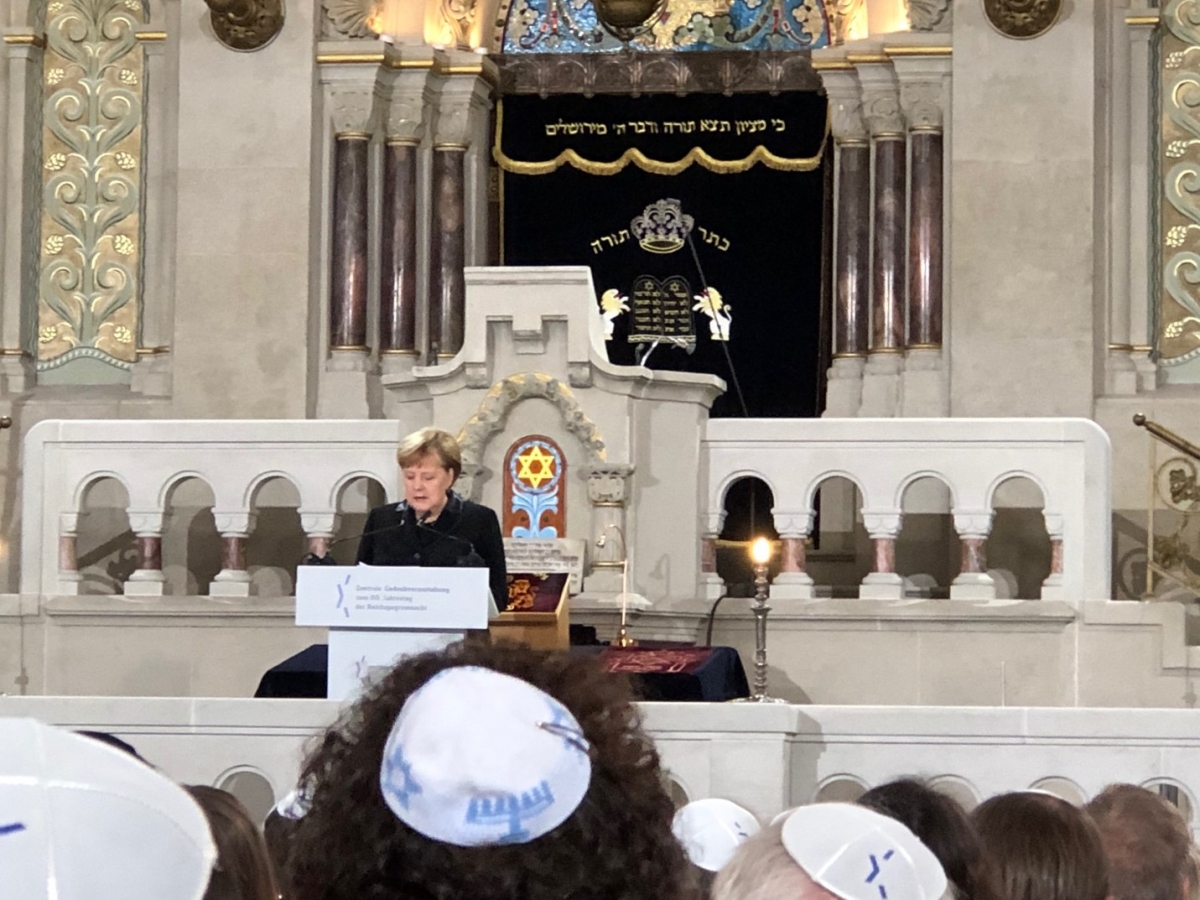 That evening, we attended Kabbalat Shabbat services at the Pestalozzi synagogue where I was invited to light the Shabbat candles. There were government dignitaries who spoke and a special sermon by Rabbi Henry Brandt.

Flowers and candles were placed by memorial markers on the pavement where Jews had lived throughout the city.

This was art and culture day—visiting the special exhibit of artist George Grosz (1893-1958) who was a prominent figure in the Dadaist movement in Germany. He ominously portrayed the rise of fascism and was deemed a “degenerative” artist by the Nazis.

In the evening, the Jewish Cultural Center of Berlin hosted a concert featuring Israeli singer-songwriter David Broza and his quartet at the Rykestrasse Synagogue. The previous day, that synagogue had hosted Chancellor Merkel and the Kristallnacht commemorative service and one day later, we were rocking along with David Broza. It was quite a contrast in moods and tone.

We all met up later that afternoon at the Pestalozzistrasse synagogue for the celebratory concert marking the tenth anniversary of the Abraham Geiger College Cantorial School. WRJ was instrumental in building the music library when the Cantorial School opened in 2007. It was an honour to deliver remarks on behalf of WRJ.

The concert featured graduates and current students of the cantorial school, including the soon-to-be installed new cantor of the Pestalozzistrasse synagogue, Cantor Isidoro Abramowicz.

A highlight was meeting Isak Aasvestad, one of our WRJ rabbinic scholarship recipients: 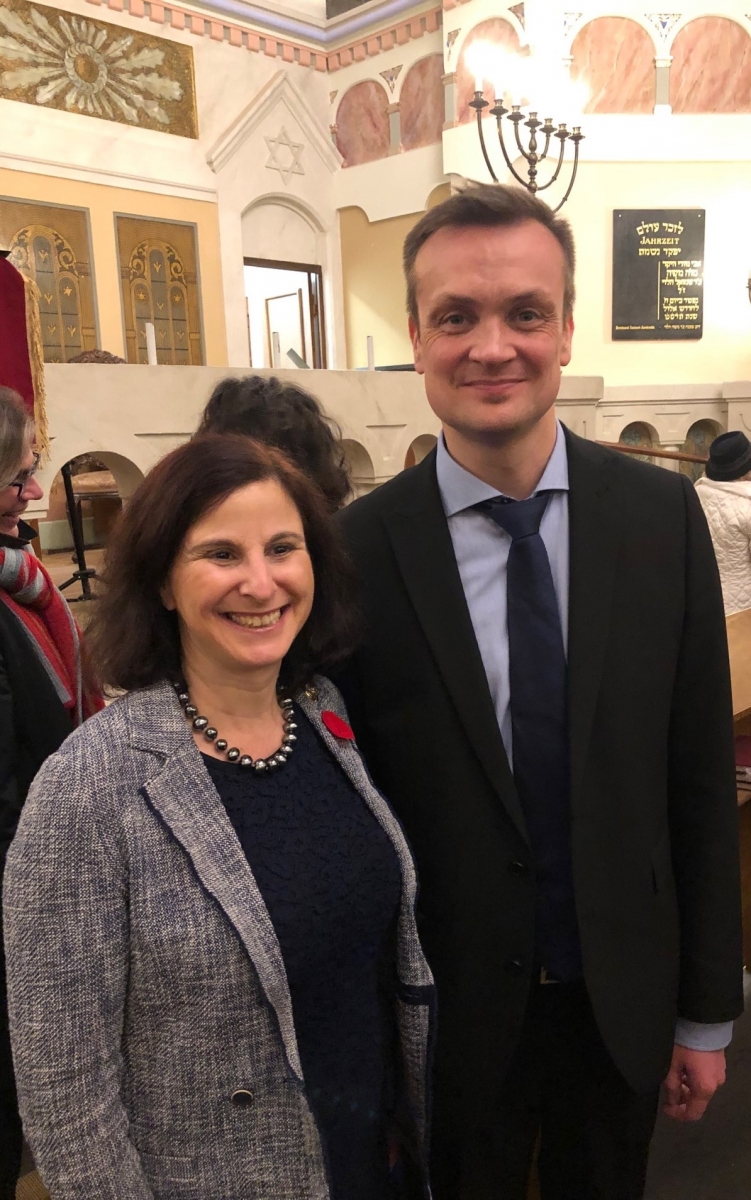 All in all, the trip was personally meaningful and it gave me such joy and pride to introduce WRJ to a wide variety of women and men in the Reform world overseas.

Sara Charney is WRJ 1st Vice President and a member of Holy Blossom Temple Sisterhood in Toronto, ON.

Meet the Next Generation of Climate Change Activists

Sharing Our Stories: In My Grandfather’s Footsteps

Our Sisterhood's Braille Group: Over 60 Years of Excellence!