Sharing Our Stories: Who Inspires You?

Sharing Our Stories: Who Inspires You?

This essay is published as part of the WRJ “Sharing Our Stories” project – a place where Reform/Progressive women in North America and around the world share personal stories of sisterhood, spirituality and social good in an effort to help us create meaningful connections and better understanding of each other, our shared values, goals and challenges, to share what we have in common as Reform/Progressive Jewish women, and also explore our own unique identities as citizens of different cultures.

Considering oneself fortunate may happen for a number of reasons. It is felt in my life because I am privileged to have a good friend named Leah Linton. We met during my conversion studies when I would show up as well at Torah Study each Saturday at our synagogue, Temple B'nai Israel in Southbury, Connecticut. Since that time period, years have passed and I was honored to attend Leah's ninetieth birthday party, where I met her supportive children and their families. I had always considered Leah humorous, but until that particular party, I had no idea she was actually the former nursery school teacher of my favorite Comedy Central “newscaster”, Jon Stewart. Her humor at Torah study emerged amidst a gathering that included members of all faiths, including a protestant minister and his missionary wife. Her delivery was slow and determined, dry and pointed. She was a pro in my mind.

Leah and I came to share a great deal over the years as friends, separated only by decades and never in our view of the universe. In time, I not only converted but celebrated wedding vows within the Jewish faith on the shore of Tel Aviv. Leah was the first person with whom I recounted our spiritual experience. I had passed the age for a Bat Mitzvah, as a convert. After two years of study, three of us celebrated in a Newtown synagogue, Adath Israel, where a Sandy Hook child had been a member. Leah, a Holocaust survivor, offered a beautiful reading during the ceremony. 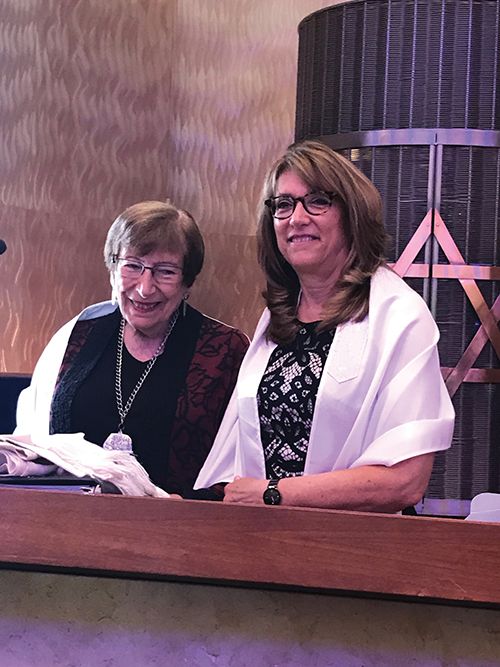 Months passed, and Leah told me that she and her daughter Leslie were now studying for their own b'not mitzvah. When the day arrived, Leah followed the Torah through the congregation armed with her walker with a grandchild seated atop the walker. The sanctuary was over-flowing.

I did not offer a reading or sing that day for secretly I had created two hand-drawn bat mitzvah certificates for Leah and Leslie in calligraphy. I included decorative images in gold and white of Chagall’s Firebird and candles softly framing each name written in Hebrew. Gold patterned paper covered the certificates. Leah and Leslie commented on the strength of women in D’var Torah recitations and sharing. My own D’var Torah, four months earlier, had revolved around the notion of being within a Chagall painting on my drive home from bat mitzvah group studies – “floating in an ethereal mikvah,” I was both happy and content.

As friends, Leah and I often see one another because she has generated a class at her residence for me to instruct her and friends in watercolor. Now Leah nurtures her creative spirit in paint – and her artwork will be in a new exhibition along with other seniors in her class. She even spoke at my job interview. She is such a great friend and nurturing presence. Surviving the Holocaust is intertwined with her ongoing task of repairing the world as the love she brings with her and shares is manifest each day. My dear friend Leah gives me hope and courage each day – and we even share fashion tips as years melt away.

Ival Stratford Kovner is a widely exhibited and award-winning artist, art teacher and horse lover. She has been a guest lecturer twice at the “WomenExplore” lecture and discussion forum at Harvard University's Democracy Center in Cambridge, Massachusetts, most recently as a featured speaker in November 2018 on “Art to Effect Social Change.” She also teaches watercolor to cancer survivors and Alzheimer patients. Ival is a member of Temple B'nai Israel in Southbury, Connecticut.

Categories: Our Community, Sharing Our Stories

It's a Small World!

Sharing our Stories: Judaism in My Life

Sharing our Stories: How Judaism Influences My Work and My Life