This week’s portion is Va-Yikra, the opening of the book of Leviticus. We begin with a description of all the different kinds of sacrifices and how they are to be performed. I am left with imagining the scene at the Tabernacle or in the Temple: the sights, the sounds, the smells. The smell of animals and burning meat must have been intense. I suppose it smelled a lot like a very large barbecue (yum!).

Once the Temple fell and Judaism moved more toward what we know today, we stopped sacrificing animals. In so doing, did we sacrifice the overwhelming sensory experience? Sure, today we hear and see, and at Havdalah, we smell, but most of our spiritual experience is internal and cerebral, not sensory. What have we lost?

One way in which I try to put more sensory experience into my worship is through the tactile experience of tallit and tefillin. As I wrap myself in the warm embrace of the tallit or wrap the leather strap of tefillin along my arm (when they were new, there was also the wonderful smell of leather, although that has since faded), my sense of touch becomes part of my worship.  I love that experience.  Its something that means a lot to me and something I would hate to lose.

When I was in college in the 1980s, my parents went to Israel and bought my first tallit. They told the salesperson that it was for a “small person.”  “A bar mitzvah boy?,” he said, “he’ll grow.” “No,’ said my parents, “this person is not getting taller.” They did not tell him that the tallit was for a woman lest he refuse to sell it to them. Today, and in fact even just a few years later, the store is full of pinks, purples and other colors definitely meant for the women’s market. Times change. 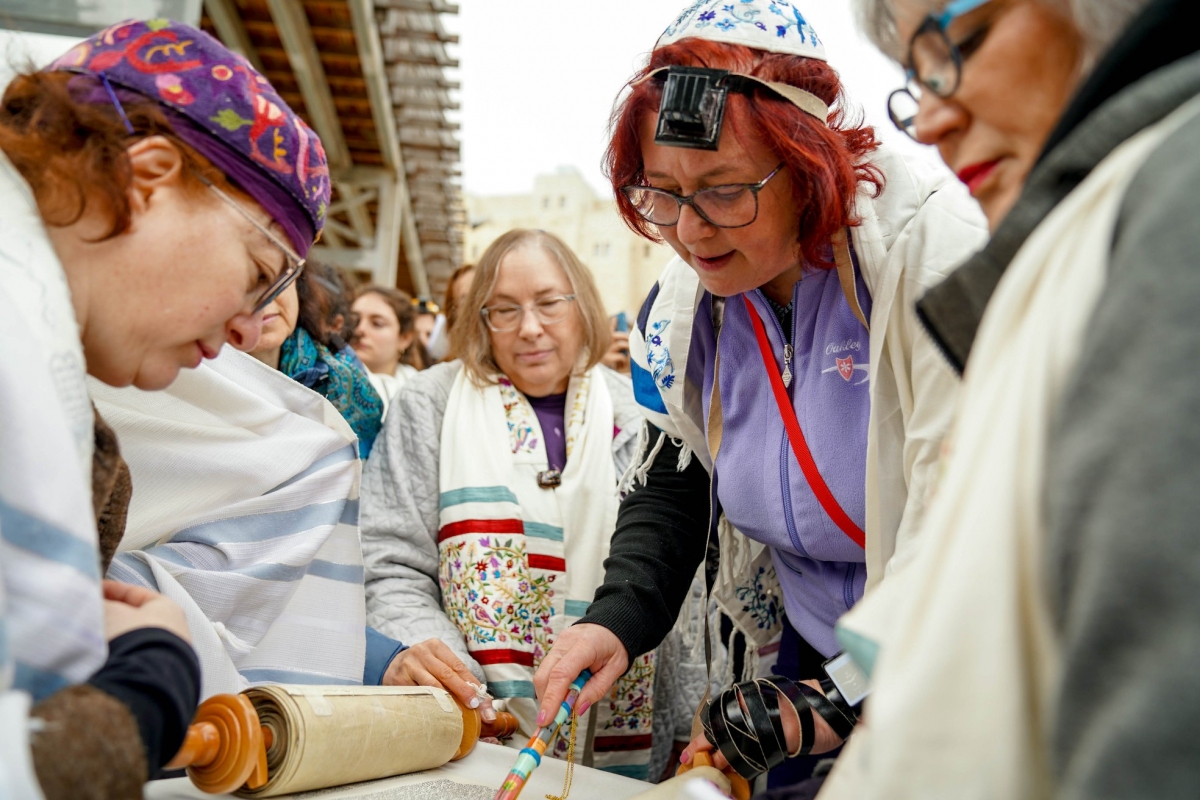 Here in the United States times have definitely changed. Today a woman in tallit and maybe even tefillin is not an uncommon site in our congregations. Thanks in part to the advocacy of WRJ for women’s equal religious rights in our movement, we do all the same things as the men, including not only tallit and tefillin, but reading Torah and becoming ordained clergy. But this is not true everywhere. At the Kotel, the Wall, the holiest site in the Jewish world, women are not allowed to read Torah. On Rosh Chodesh Adar (February 26), I and the other 30 women traveling on the WRJ Women’s Journey to Israel celebrated with Women of the Wall (WOW). I had the unbelievable honor of leading Hallel and of chanting from the Torah. The Torah had to be smuggled in because although there are many scrolls at the Kotel, women are allowed access to none and it is not allowed to bring one’s own. There is a concerted effort made to drown out the prayers of Women of the Wall: there is a loudspeaker on the men’s side aimed, not at those who might need to hear the prayer leader, but directly into the women’s section. The ultra-Orthodox women and girls pack the plaza to squeeze Women of the Wall into a tight space and then stand around hissing and shushing. Imagine praying with hecklers!

I can assure you that the onslaught of insults, catcalls and noise is NOT the sensory experience that I crave in worship. WRJ will continue to stand with WOW until women can have the experience they want at the Kotel. No calves or goats or burning meat, no catcalls and jeers, just the warm embrace of a tallit, the hug of tefillin on an arm and the sound of a woman reading Torah.

Abigail Fisher serves as WRJ’s Vice President of Philanthropy.  Abby is also a past president of the WRJ’s Northeast District. In addition to her work with WRJ, Abby is the founding chair of URJ Six Points Sci-tech Academy East and serves on the Commission on Social Action of Reform Judaism. She resides in Belmont, MA with her husband, her dogs, and, when they are home, her two children.

Save the date: WRJ Fried Women's Conference will be held virtually on May 1, 2020!