New York, NY December 20, 2017 – Dr. Tamara Cohn Eskenazi and Rabbi Andrea Weiss, Ph.D., have received the Women of Reform Judaism (WRJ) Faculty Award in recognition of their support of WRJ and their scholarship and commitment to the Reform Movement.

Drs. Eskenazi and Weiss served as the editors of the groundbreaking text: The Torah: A Women’s Commentary, the first comprehensive commentary written entirely by female rabbis and Jewish scholars. This seminal text has educated a generation of Jewish scholars and students to a previously underrepresented female perspective on the text of the Torah. In 2009, this volume won the Jewish Book Council Everett Family Foundation’s Jewish Book of the Year Award. In ten years, the book has reinforced the Reform Movement’s values of clergy and scholars and promoted women as thought leaders. The Commentary was just released in digital format in December 2017. 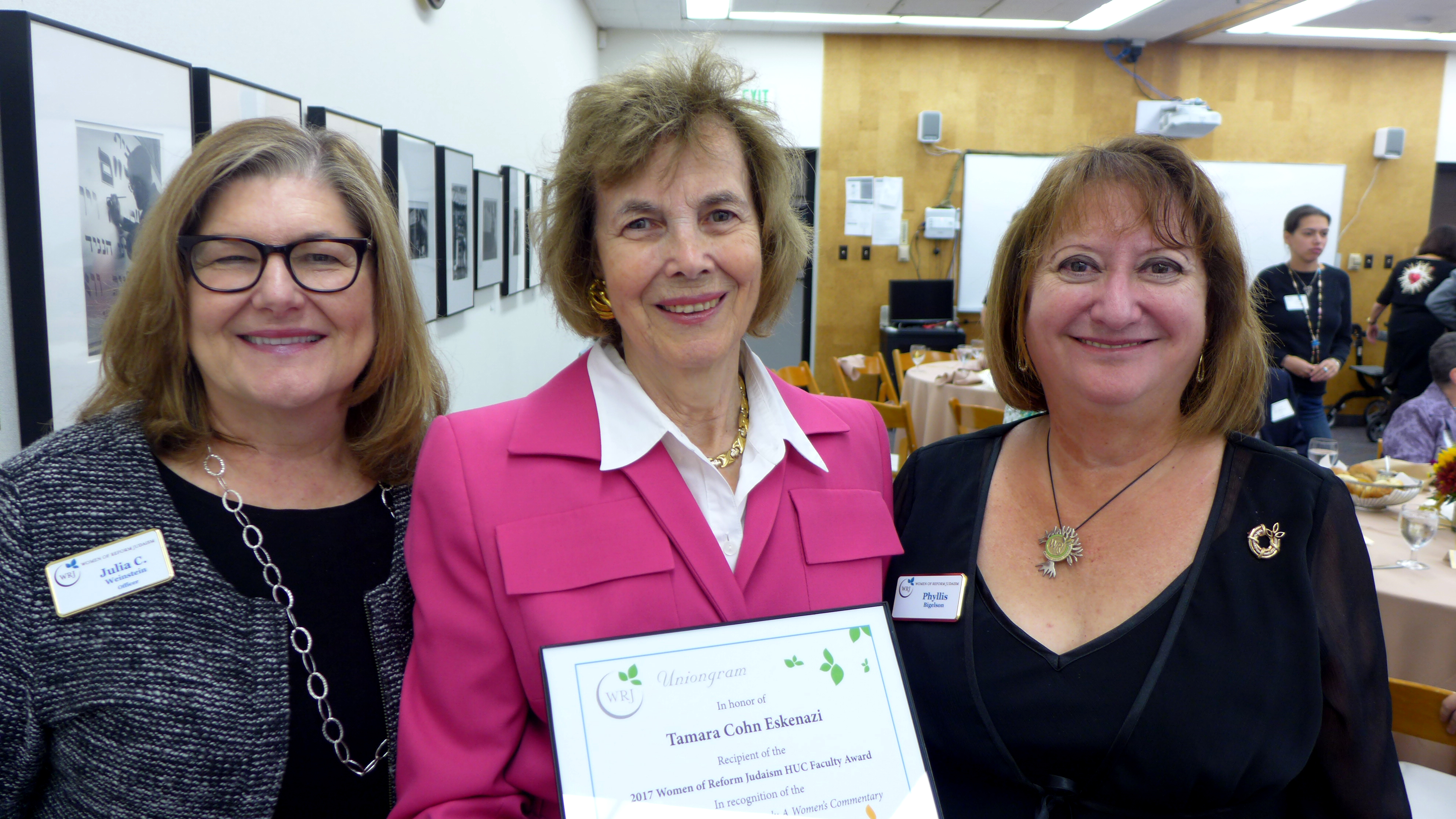 Women of Reform Judaism’s Executive Director, Rabbi Marla J. Feldman, shared: “We are so pleased to offer the WRJ HUC Faculty Award this year to Drs. Eskenazi and Weiss in acknowledgment of their landmark publication The Torah: A Women’s Commentary, this year celebrating its 10th anniversary. In giving a voice to our foremothers, they have helped women today discover their own voices and opened up a new era of Biblical scholarship.” 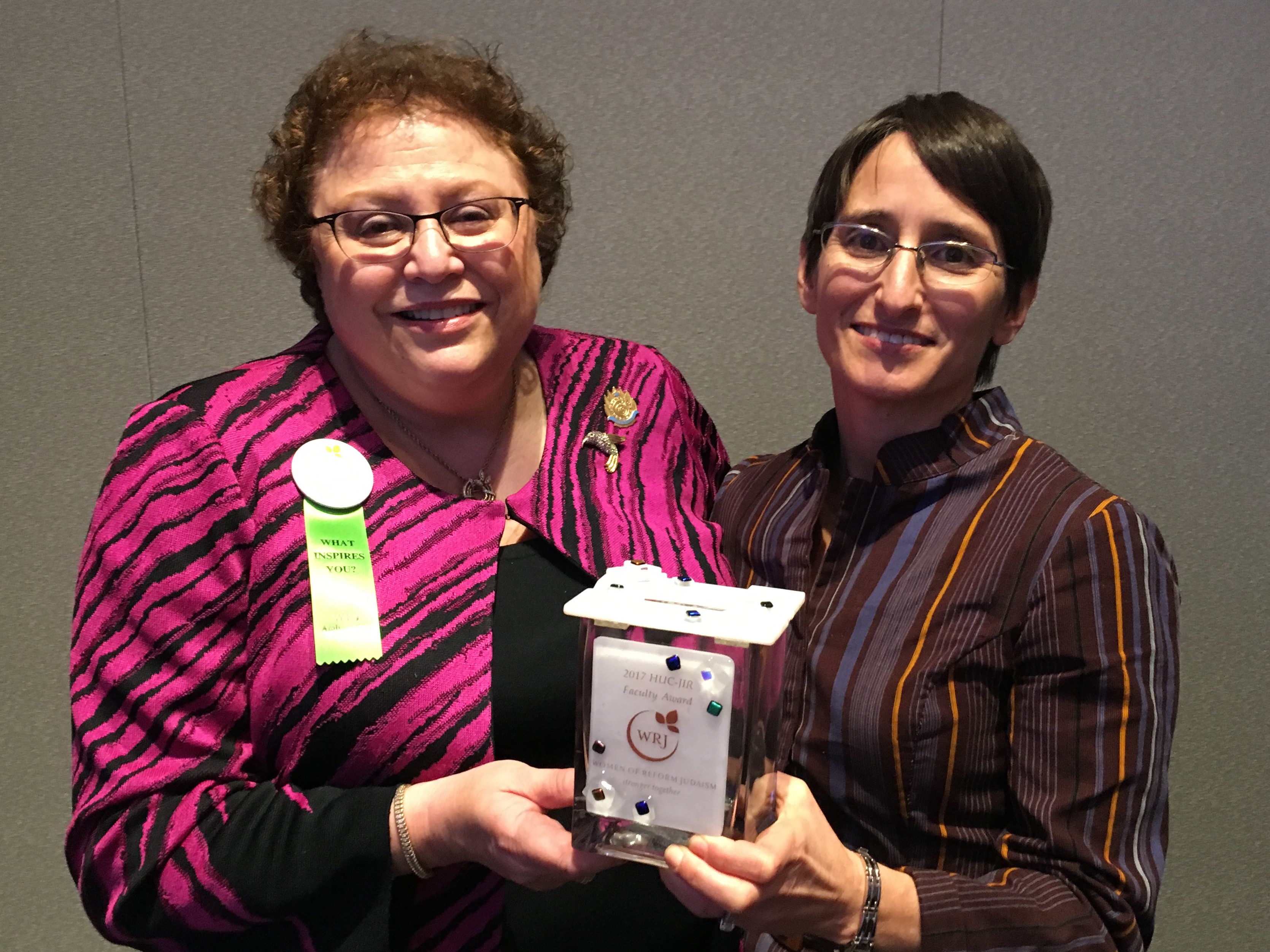 The WRJ Faculty Award was established in 2013 in honor of Rabbi David Ellenson on the occasion of his retirement as president of HUC-JIR. It is given biennially to a faculty member of HUC-JIR who has supported WRJ in its endeavors and whose work exemplifies the values and mission of the organization. The inaugural recipient in 2013 was Rabbi Dr. Gary Zola, Executive Director, Jacob Rader Marcus Center of the American Jewish Archives. In 2016, Dr. Richard S. Sarason, Director of the Pines School of Graduate Studies at Hebrew Union College-Jewish Institute of Religion (HUC-JIR) in Cincinnati was the second recipient to receive this honor.

Rabbi Aaron Panken, Ph.D., President of Hebrew Union College-Jewish Institute of Religion, stated, “We take pride in Rabbi Andrea Weiss, Ph.D., and Dr. Tamara Eskenazi, whose scholarly approach to Jewish text is informed by their innovative, feminist understanding. The Torah: A Women’s Commentary is an essential resource for clergy and the lay public who seek to find contemporary meaning and relevance in our Biblical sources.  This tribute to them by Women of Reform Judaism reinforces the egalitarian, inclusive, and pluralistic mission that we hold sacred, as we prepare the next generations of leaders for the Reform Movement and the Jewish people.”

Rabbi Hara Person, Chief Strategy Officer and Publisher for CCAR Press who published The Torah: A Women’s Commentary, shared: “This groundbreaking Commentary provides a women's interpretation of Torah that had been too long underrepresented. Thanks to the scholarship and passion of Drs. Eskenazi and Weiss, with whom I was so privileged to work, this commentary has already had great impact on a generation of Jewish scholars and students. On this, the 10th anniversary of the publication, WRJ’s recognition of these scholars is well-deserved.”

Dr. Tamara Cohn Eskenazi was the first female biblical scholar at Hebrew Union College – Jewish Institute of Religion (HUC-JIR) and today serves as The Effie Wise Ochs Professor of Biblical Literature at the HUC-JIR Los Angeles campus. Dr. Weiss was ordained by HUC-JIR and serves as Associate Professor of Bible at the New York HUC-JIR campus and will serve as HUC-JIR’s Jack, Joseph and Morton Mandel Provost as of July 1, 2018.

Women of Reform Judaism (WRJ), founded in 1913, is the women’s affiliate of the Union for Reform Judaism, the central body of Reform Judaism in North America. WRJ represents tens of thousands of women in hundreds of women’s groups, strengthening the voice of women worldwide and empowering them to create caring communities, nurture congregations, cultivate personal and spiritual growth, and advocate for and promote progressive Jewish values.