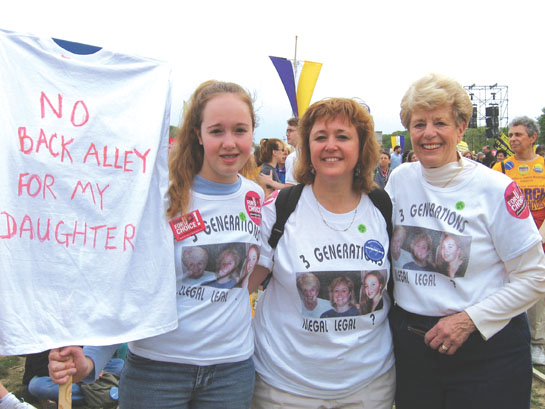 Watch our webinar recording and learn more about the upcoming U.S. Supreme Court case regarding abortion

Life is sacred in Judaism. Banning potentially lifesaving medical procedures and interfering with a doctor’s decision-making runs contrary to the Jewish commandment to protect life. This cohort brings together Jewish communities to pursue reproductive health and rights together.

For nearly 85 years, WRJ has been a leading advocate for reproductive rights and health. In adopting more than a dozen resolutions affirming a strong and vocal stance and mobilizing its members, WRJ speaks out for the rights of those who are pregnant to exercise moral authority over their own bodies. WRJ was among the first in our Movement to call for access to information about contraception in 1935 and for abortion reform in 1965. On the issue of abortion, WRJ stated: “We believe that the right to choose on the matter of abortions is a personal decision based on religious, moral, or cultural values and beliefs; it should not be determined for others by special interest groups whether religious or otherwise nor should the government be the enforcing agency for their points of view” (Women’s Rights, 1977).

This resource guide is intended to help Reform sisterhoods, congregations, and individuals mobilize and advocate for reproductive health and rights in their own communities. The suggested list of actions below was written to help kickstart your communities’ advocacy around reproductive issues.

Thank you to our donors who make this work possible.

The actions below are not intended to be an exhaustive list of ways to make change, rather serve as a guide or starting point. After determining with your community where your priorities lie, feel free to think creatively about the types of actions you would like to take.

WRJ and RAC are collaborating on the development of the Reproductive Health & Rights Campaign to address this critical issue. Your gift to this appeal will support this important social justice endeavor on both the federal and state/provincial levels.

What Jewish law really says about abortion - from JTA

What You're Getting Wrong About Abortion And Judaism - from the Forward

Why Are Jews So Pro-Choice - from the Forward

Reproductive Issues in the News

What Actually Happens When a Country Bans Abortion - Foreign Policy

Because of Choice, I Got to Choose You - Wellesley Underground