WRJ is home to a hardworking and creative professional staff who oversee marketing and communications, events and leadership, philanthropy, programs and affiliate services for sisterhoods & Districts, and the organization as a whole. This diverse team has a variety of responsibilities and interests that help make the organization a success.

Rabbi Marla J. Feldman, Executive Director (mfeldman@wrj.org, 212.650.4050), has been with WRJ since 2012, having previously served as the Director of Development for the URJ and Director of the Commission on Social Action of Reform Judaism. Feldman is a Reform rabbi (HUC-JIR, New York) and lawyer (JD, Univ. of Fla). Previously, Rabbi Feldman worked in the Jewish community relations field in Detroit and Delaware and served Reform congregations in Sarasota and Orlando, Florida. Feldman has authored Reform Movement action manuals and published modern midrash, and her articles have appeared in numerous publications and newspapers.

Joshua Freedman, Administrative Assistant (jfreedman@wrj.org. 212.650.4095) holds a bachelor's degree in Communication Studies from Montclair State University and a master's degree in Publishing from Pace University. He is an avid enthusiast of reading, Broadway shows, and games of all varieties.

Bayley Swain, Administrative Assistant (bswain@wrj.org, 212.650.4065), holds a bachelor’s degree in European History from Smith College and a master’s degree in Religion & Ethics from Yale. She is enormously fond of strong coffee, public radio, and almost anything written by Grace Paley.

Heather Lorgeree, Manager of Engagement (hlorgeree@wrj.org, 212.650.4063), handles support for all potential, new, and current affiliates and serves as the staff liaison for the WRJ Districts. Heather is an active member of TKol Dorot in Oradell, NJ, where she was proud to be honored as a WRJ Unsung Heroine and, most recently, a Woman of Valor. Heather enjoys baking cakes and making ice cream and is also an avid Chicago sports fan; she supports all of the teams, but the White Sox are her favorite.

Jenny Levy, Engagement Associate (jelevy@wrj.org, 212.650.4060), assists with program and affiliate services, including Lilith Salons, Or Ami Awards, Tzedakah Collectives, the Chai Mitzvah Project, and other sisterhood support. She completed her M.A. in Political Science at the University of Illinois at Urbana-Champaign. Previous to WRJ, Jenny lived in Tel Aviv for over five years, where she worked at nonprofits serving at-risk youth and promoting women’s reproductive health rights. She moved to New York in the Spring of 2019 and spends her spare time teaching yoga, volunteering with new immigrant women, traveling, and exploring New York City.

Elisa Heisman, Manager of Marketing & Communications (eheisman@wrj.org, 212.650.4066), oversees and coordinates all internal and external marketing and communications and oversees Advocacy initiatives for WRJ. She is an active member of Congregation Beth Or in Maple Glen, PA where she also served as Director of Programs and Communications for over a decade. Elisa lives with her husband, Scott, two children, Jenna and Andrew, and their poodle, Chloe. She is an avid reader, a huge Phillies fan, and almost always has a jigsaw puzzle in progress on her dining room table.

Kate Franklin, Programs and Communications Associate (kfranklin@wrj.org, 212.650.4045) Supports WRJ communication and marketing campaigns, advocacy initiatives, and Board programming.  Originally from outside of Philly, she holds a BA in Theatre and Communications from Northeastern University, where she focused on creating art aimed at ending sexual violence on college campuses.  She moved to NYC in September 2021 and loves baking three-layer cakes, seeing musicals, and obsessing over any random dog she passes on the street.

Lillie Heyman (she/her) RAC Legislative Assistant (lheyman@rac.org, 202.545.3652) is originally from Florham Park, New Jersey, where she was a member of Congregation Beth Hatikvah. Lillie graduated from the University of Michigan’s Gerald R. Ford School of Public Policy in 2020 with a B.A. in Public Policy and a minor in Sociology: Law, Justice, and Social Change. On campus, Lillie was heavily involved in Dance Marathon, facilitated a project-based leadership development program at the Barger Leadership Institute, served as an elected representative in Central Student Government, assisted in sexual assault prevention research, and sang in a Jewish a cappella group, Kol Hakavod. She has interned for M.P. Cheryl Hardcastle in the House of Commons of Canada and Senator Cory Booker in his DC office. She is excited to dive into Jewish social justice advocacy with the RAC and WRJ following her work as a campaign field organizer in Michigan and Georgia for the general and runoff elections. Lillie’s legislative portfolio includes reproductive health and rights, economic justice, labor, disability rights, women’s issues, and human trafficking.

Amanda Feldman, Manager of Events & Leadership (afeldman@wrj.org, 212.650.4054), oversees planning and logistics for the WRJ Fried Women's Conference as well as all other conferences and committee meetings. She also is the staff liaison to the WRJ Board of Directors, working on all Board meetings, trainings, and webinars; nominations; onboarding; and other leadership-related content. A lover of travel, Amanda enjoys being able to attend WRJ events in different locations. She is an avid reader and cook who loves spending time with friends and family, a fan of the New York Rangers, and a member of the Garden City Jewish Center Sisterhood in Garden City, NY (with her mom).

Elizabeth (Liz) Rosenblum, Operations Manager, (lrosenblum@wrj.org, 212-650-4056), oversees daily office operations. Liz served as WRJ's Manager of Development and Special Projects (2012-2017). After stints as the Director of Adult Life at the Rockland JCC and Development Director at Ben Porat Yosef Day School, she found that she just could not stay away from her WRJ 'sisters'. Liz belongs to Temple Beth Shalom in New City, NY where she lives with her husband, Greg, sons Charlie and Henry, and dog, Dexter.

Shari Schulner, Manager of Philanthropy (sschulner@wrj.org, 212.650.4072), oversees the organization’s fundraising efforts, including the YES Fund & Lifeline Endowment and Annual Campaign. She has a Master's degree in Childhood Special Education from Hunter College and a BA in English, Literature, and Rhetoric from SUNY Binghamton. Previous to WRJ, she worked in development serving low-income youth and their families. She loves yoga, exploring new neighborhoods, spending time with friends and family, and traveling. She grew up in Rockland County and now lives in Queens with her husband, Ethan.

Natalie Boles, Philanthropy Associate (nboles@wrj.org, 212.650.4058), supports the Philanthropy efforts of the WRJ through programs such as Ner Tamid, Chai Society, and the YES Fund. A nonprofit administrator originally from Massachusetts, she holds a BA from Connecticut College where she double majored in Theater and English. She moved to NYC in October 2019 and loves getting to explore all that the city has to offer. In her spare time, she enjoys seeing theater, traveling, and connecting with family and friends. 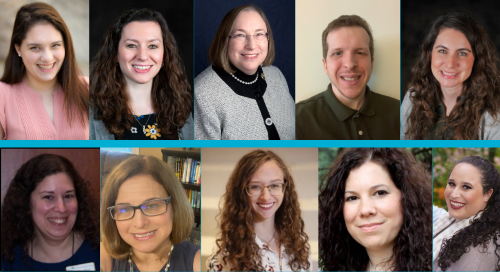