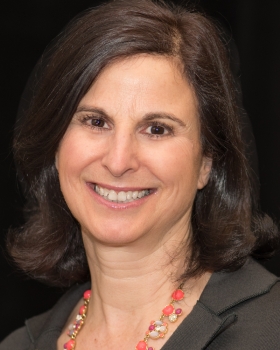 Elected in March 2021, WRJ President Sara Charney is the organization's first Canadian president. She has been actively involved in WRJ since becoming local sisterhood president at Holy Blossom Temple in Toronto, Ontario, Canada. She has held many positions on the District and North American levels.

My WRJ leadership journey can be summed up in three words: invite, nurture, and engage. Upon completing the two-year Adult B’nei Mitzvah program at my congregation, Holy Blossom Temple in Toronto, ON, Canada, I was invited to join the sisterhood Board of Directors. I was a bit uncomfortable by this invitation as I was not even a member of our women’s group. When I shared this with the Chair of the Nominating Committee, her response was, “Sometimes it’s best to jump in with both feet first!”

During my first few years on the sisterhood Board, I was invited to chair various committees while being nurtured as I learned the ropes of governance of committees from both a management and a volunteer engagement perspective. It wasn’t too long before I was nominated to serve as President of sisterhood, which began my engagement with WRJ at the District level and North American events. I attended my first WRJ conference in 2001. In Boston, and I was shepherded and guided by some dear friends and fellow sisterhood leaders. I was intrigued to see women writing Hebrew letters in a Torah scroll that became WRJ’s Torah scroll, never imagining that I would read from that Torah one day.

I met extraordinary women involved in meaningful advocacy projects for North America and beyond, women who chanted Torah, women who mentored and encouraged other women to further develop their leadership and public speaking skills, and women who taught – even me! –  to lead a budget workshop.

I soon realized that WRJ could offer what I had always longed for but never knew existed: spiritual connection, a welcoming community of progressive Jewish women, and a forum to embrace a life of tikkun olam.

I was honored to join WRJ’s Board of Directors in 2005. Being in a leadership position for WRJ has given me the confidence and the opportunity to develop my skills further. I served as a Member At Large of the Executive Committee, then as Vice President of Marketing & Communications, Vice President of Service to Sisterhoods & Districts, Vice President of Programs & Education, and finally as First Vice President. There were many highlights along the way, including being the Co-Chair of Local Arrangements for the WRJ Assembly in Toronto in 2009, Co-Chair of the WRJ Centennial Mission to Israel and Berlin in 2013, and the opportunity to represent WRJ at the 80th commemoration of Kristallnacht in Berlin in 2018. Sixteen years ago, when I first joined WRJ’s Board of Directors, I never would have envisioned I would have these unbelievable experiences. Still, I was invited, nurtured, engaged, and supported by my WRJ sisters each step of the way.

As an avid traveler, my work with WRJ affords many opportunities to visit communities across North America, in Israel, and elsewhere around the world to offer leadership training sessions, participate in Shabbat worship services, and have meaningful conversations with women where they live, to explore how we can work together and grow “stronger together.”

I am very fortunate that my parents had the foresight to enrol me as a child in a non-traditional academic environment. Bilingual education in Toronto in the early 1960s was generally unknown, but a unique opportunity presented itself, and I found myself at a school at which all of my classes were taught in French. English was not introduced until the 4th grade, and then only as one subject matter. I studied other languages at school and elsewhere, including Hebrew school. I found my true passion at the University of Toronto, where I pursued a Ph.D. in Italian language and literature and then taught there for many years.

Women of Reform Judaism is a warm, inclusive and supportive global community of Progressive Jewish women. There are many ways to engage, and I look forward to meeting and welcoming you. It is a great honour to serve as President.