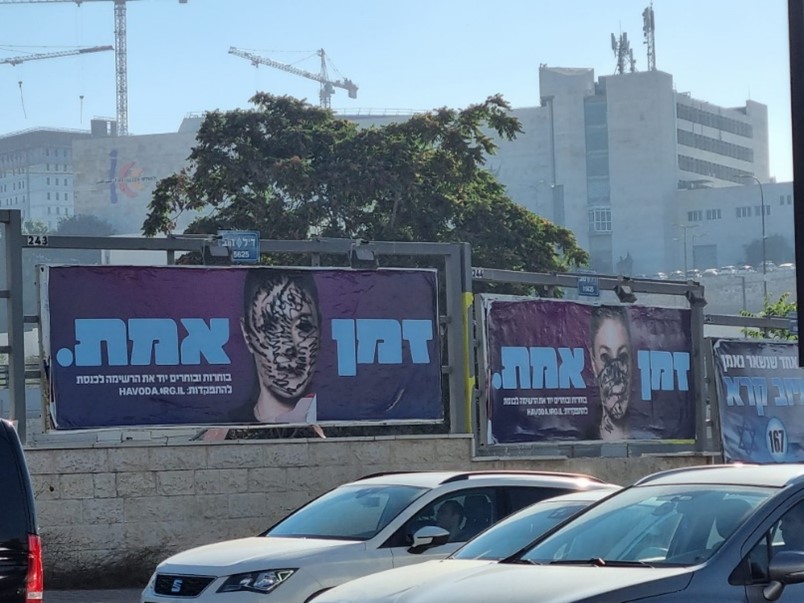 I have been fighting gender segregation and the exclusion of women for 18 years since I joined the Israel Religious Action Center (IRAC). The attempts to treat women differently and prevent them from enjoying equal rights are incomprehensible in a democratic state.

Our first struggle was against gender segregation on buses, where women were sent to the back of the bus. The Supreme Court accepted our petition and ordered bus segregation illegal. Then, we fought segregation in cemeteries, where women were not allowed to eulogize their loved ones and take an equal part in the funeral – until we stepped in and sued the discriminating burial societies. We helped Orthodox women in Beit Shemesh fight illegal and humiliating modesty signs all the way from the lower courts to the Supreme Court. We stopped the infuriating silencing of women on an Ultra-Orthodox radio station, which did not allow women to be heard on the station until we took them to court. The court ordered the station to stop the exclusion and pay $1 million (NIS) in damages.

For the past 25 years, demands for segregation and exclusion of women have been voiced by Ultra-Orthodox leaders who feel threatened by the liberal society and the important role Ultra-Orthodox women play in the family. They are the ones who pursue studies and join the workforce, sustaining the family, while the husband studies at a Yeshiva. They are the ones who handle the outside world; the segregation and exclusion send them a message of their proper place in the eyes of the Ultra-Orthodox leaders. It should be noted that gender segregation in the public sphere is not an age-old tradition but rather an “invented tradition” that represents extremism which was not widespread until the end of the 1990s.

State authorities accepted the demands for gender segregation since no one resisted them until IRAC came along and challenged those practices which go against the basic values of equality and dignity. We discovered that many Ultra-Orthodox women and men oppose such practices but could not challenge them. They thanked us for doing so on their behalf.

We have had many victories over the years, and the opposition to gender segregation and the exclusion of women is widespread today. However, the phenomenon has not disappeared. Instead, it has changed. One of the most troubling faces of this phenomenon is the disappearance of women’s images from the public sphere – either by vandalizing or defacing female images or by refraining from showing them altogether. I have experienced both these practices personally in the last year.

At the end of 2021, an Ultra-Orthodox internet news site published a photo taken at a meeting of the leaders of the Reform and Conservative movements and Women of the Wall with the President of Israel on the issue of the Western Wall. However, all the women in the photo (including me) were blurred, while the men weren’t. 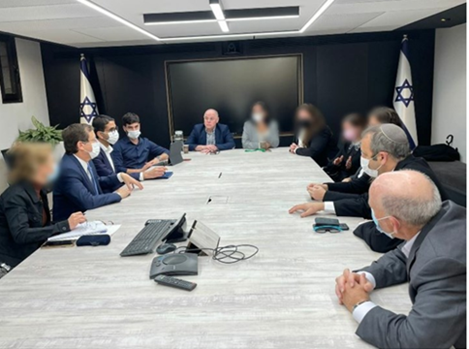 Seeing the blurred image of myself felt humiliating. I decided to speak up. Thanks to WRJ’s YES Fund and other supporters, we filed a civil suit against the internet site this past May on behalf of myself and the other women whose image was blurred. We demanded compensation for the harm caused by the humiliating photo. A court hearing is scheduled for November.

This is not the only case of defacing female images. In billboards positioned in central locations in Jerusalem, it is a daily sight that female images are vandalized – sprayed or painted upon, or torn, such as this photo of the 95-year-old Holocaust survivor Peggy Parnass: 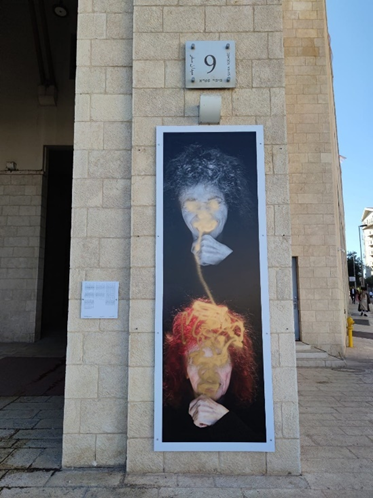 Such vandalism harms women’s rights for equality and dignity and conveys the disturbing message that women should not be seen in the public sphere.

Last year, the Jerusalem district court accepted a petition we filed against the Municipality and ordered a firm treatment of this humiliating practice. As a result, security cameras have been installed in prominent places. Unfortunately, the defacement continues, as can be seen in this photo of Merav Michaeli, which was taken last August on a central road at the entrance to Jerusalem: 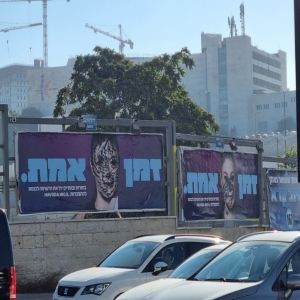 In the past year, we have monitored a bill that was supposed to aggravate the punishment for defacing female images, but due to the fall of the coalition, the bill has been frozen. After the upcoming Israeli elections, we will resume the effort to promote this bill.

And as if vandalism and defacement of women's images weren’t bad enough, it has led to another troubling phenomenon - censoring women’s images. For fear of their publications being vandalized, some companies and organizations chose not to post women's images at all. This dangerous “solution” succumbed to the violence and sacrificed the presence of women in the public sphere altogether. Such censorship occurs in medical clinics located in neighborhoods that serve the Ultra-Orthodox population. We have been monitoring the exclusion of female images from medical clinics for years. The Justice and the Health ministries sided with us and ordered the medical clinics to refrain from such censorship but to no avail.

Last year, I began physiotherapy treatment in two clinics in Jerusalem. I was shocked to discover that in the main branch of my medical clinic in central Jerusalem, no women appear in the dozens of photos hung on the walls of the clinic. You can only see men and boys. Here are a few examples: 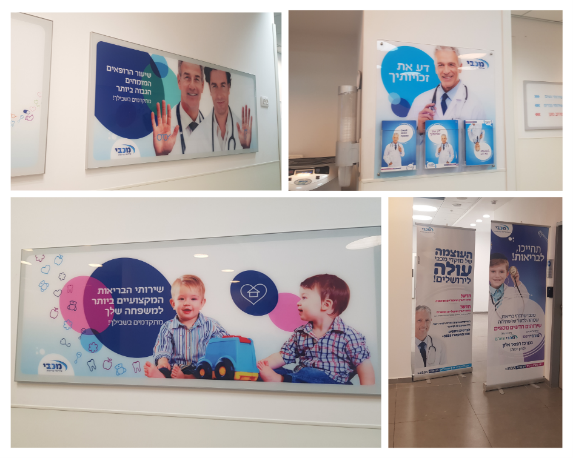 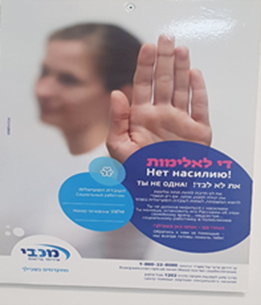 I could not believe my eyes: the only female image was of a blurred woman saying, “stop domestic violence!” The exclusion sends a horrible message of inferiority to women and girls – patients, nurses, and doctors. Just imagine a boy and a girl in this clinic. While the boy can see himself in the dozens of images hung around the clinic, the girl cannot imagine being a doctor or a nurse; even her presence as a patient is denied as if women and girls do not exist at all. In my view, there is a connection between erasing female images from the public sphere to heeding a warning against physical violence against women. The message is similar: women are not given equal and respectable treatment as men do.

We decided to take this case to court as well. With the assistance of WRJ’s YES Fund and other supporters, we filed a suit this past April demanding that they pay damages for the blunt exclusion of women. We are waiting for the clinic to submit its statement of defense soon.

After the case was published in the Israeli media, I was moved by a message from my female doctor, who applauded the suit and wrote that we are doing this on behalf of all female doctors who feel humiliated by this exclusion.

We still have a long way to go, but we will continue to fight the exclusion of women until the subversive message – that women should be treated equally – will be understood.

WRJ has stood by IRAC in the struggle for a more equal, just, and pluralistic Israel. Together, we will make this vision a reality. We thank you from the bottom of our hearts for your generous and continuing support, which changes the lives of Israeli women and girls and Israeli society as a whole. 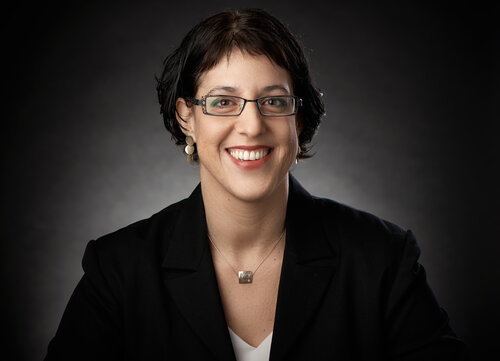 Orly Erez-Likhovski holds a bachelor's degree in law from Tel Aviv University. After interning at the Supreme Court, she received a master's degree in law with a focus on human rights law at Columbia University in New York. Orly is a member of the Bar Association in Israel and New York. Orly has served as an attorney at IRAC since 2004, as Director of the Legal Department from 2014-2021, and as Director of IRAC since 2021. Orly has brought about significant legal achievements such as making gender segregation on public transportation illegal, ending the Orthodox monopoly on state-funded salaries to rabbis, filing (and winning) the first-ever class action suit regarding the exclusion of women, and disqualifying racist candidates from running for Israel's parliament.

END_OF_DOCUMENT_TOKEN_TO_BE_REPLACED 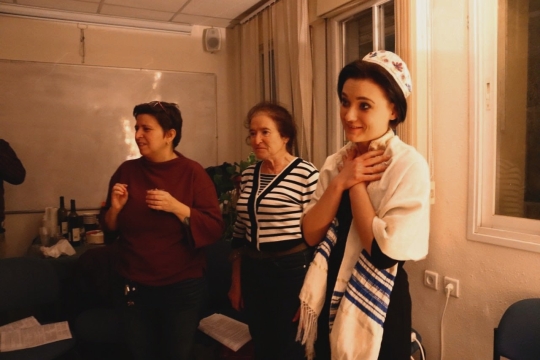 On February 24, 2022, rabbinical student Miriam Klimova and the Reform Jewish community of Israel, together with the rest of the world, were shocked by the outbreak of war between Ukraine and Russia.
WRJ YES Fund Grantee
Image 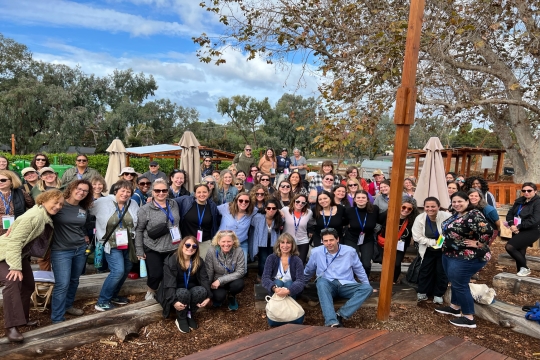 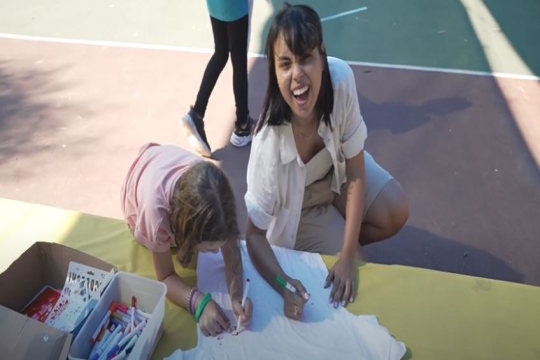 The children went to typical summer camp activities like movement workshops, clowning, capoeira, ball games, crafts, etc., as well as special events, included a “Joker Day” in the circus, a day of culture through music and food, a day of challenges in Acco Park, a bilingual performance at the Acco Theater, and a movie at Movieland Haifa. Through all of this and more, 99 Arab and Jewish children we able to put down shared roots, create friendships, and build tolerance that will change how Arabs and Jews see and understand one another for generations to come.
View More