A WRJ Statement on the 50th Anniversary of Roe. v. Wade

In June of 2022, the United States Supreme Court decided in Dobbs v. Jackson Women’s Health Organization to overturn Roe v. Wade and Planned Parenthood v. Casey, leaving abortion rights up to the states, more than half of which already ban, strongly restrict, or are likely to ban abortion. The Dobbs decision has had devastating effects, particularly for marginalized communities. Individuals in these states now face obstacles to receiving abortion care that are unrelated to medical considerations. For example, some are forced to travel to another state for abortion care, adding direct and indirect costs associated with travel logistics, childcare, and time off work. Health risks increase not only due to time delay of travel, but also from the added time for doctors to consult with lawyers, even during emergency situations. Fearing criminal charges, some have chosen to self-manage their abortion without proper medical support. Still others are forced to continue their pregnancy, putting their mental and physical health at risk. The list of actual harms inflicted upon pregnant people and their medical providers grows daily.

From the beginning, Roe’s protection of the individual right to abortion has been subject to medically unnecessary legal restrictions as well as impediments to access. In the fifty years since the Roe v. Wade decision, close to 1500 abortion restrictions were enacted, including mandatory waiting periods, parental consent laws, biased counseling, gestational bans, and targeted regulation of abortion providers (TRAP) laws. Moreover, the lived experience of these past fifty years has reminded us that legality alone does not mean full access to or equity in abortion care. Even in Canada, which has not had any criminal laws restricting abortion since 1988’s R v. Morgentaler case, abortion is not equally accessible across the country, and the existing inequality has a disparate impact on marginalized communities. In addition to improving equal access and funding, more Canadian health care professionals need to be trained to provide abortions, specifically, medication abortions, and abortion services should be normalized by family care providers.

With full awareness that abortion rights have been unequally accessible and under attack even under Roe and since Morgenthaler, we must continue to vigorously defend these rights and expand access even in states and provinces where abortion is currently considered safe and legal. Even in these regions, capacity is strained and abortion providers, seekers, and supporters need both funding and legal protection. The landscape is rapidly evolving in all states and provinces, and unnecessary restrictions exist or may arise in the future in locations where abortion is currently available.

In 1975, WRJ (then known as The National Federation of Temple Sisterhoods) affirmed, and we reaffirm today, our unbending support for the rights of a pregnant person to obtain an abortion and to exercise their personal “ethical and religious judgment in this decision.” On this fiftieth anniversary of Roe v. Wade, we renew our long-standing commitment to “vigorously supporting this individual right to choose.” And we will do our part to destigmatize abortion. Every time we say “abortion” instead of using euphemisms, we reaffirm the message that abortion should be free from barriers, secrecy, and shame. Stigmatization of abortion leads to more restrictions and inaccessible abortion care.

We recognize that reproductive freedom is not exclusively a women’s issue. It impacts anyone who can become pregnant, including women, non-binary, intersex, gender nonconforming, and transgender individuals. It affects the non-pregnant parent and the well-being of entire families. The fight for reproductive freedom, bodily autonomy, and abortion rights is a human rights issue writ large.

Reproductive freedom is inextricably entwined with our religious freedom and Jewish values. The banning of abortion interferes with our religious tradition, which upholds abortion care as permissible and, in some cases, medically necessary and religiously required.

WRJ commits to supporting efforts to preserve the bodily autonomy and moral agency of individuals, and to educate about, engage in social action related to, and advocate for the broad spectrum of reproductive health, rights, and access. This includes but is not limited to: comprehensive sexuality education, contraception and family planning, emergency contraception (such as Plan B), period parity and access to maternal health, and access to LGBTQ+ inclusive and gender-affirming healthcare. In addition, WRJ will work to mitigate the economic insecurity and devastation that comes with being denied abortion care and forced to carry a pregnancy. WRJ further commits to helping debunk misinformation about and stigma around abortion. And WRJ will continue to collaborate with and lift up the organizations and support networks that work to expand abortion access and reproductive freedom.

In light of the current and evolving realities and continuing WRJ’s long history of living our values and leading with the principles of Tikkun Olam, we will persevere together.

We must persevere together. In Proverbs 12:16, King Solomon exclaims, "A righteous [person] falls down seven times and gets up." While we and other abortion rights activists have been knocked down time and time again, we continue to get up and continue moving forward in the fight to create a world with wholeness, justice, and compassion.

Let us each resolve to be a guardian of the rights of every individual and a builder of a better society for all humanity. This is the kind of justice we seek.

Women of Reform Judaism (WRJ) is a network of Jewish women working together to empower women and communities worldwide through the bonds of sisterhood, spirituality, and social justice. WRJ, founded in 1913, is the women’s affiliate of the Union for Reform Judaism, the central body of Reform Judaism in North America. 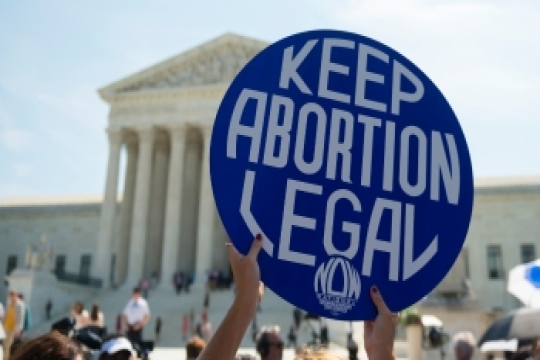