Purim is celebrated on the 14th of Adar (usually in March, sometimes at the end of February) and comes from the Book of Esther. 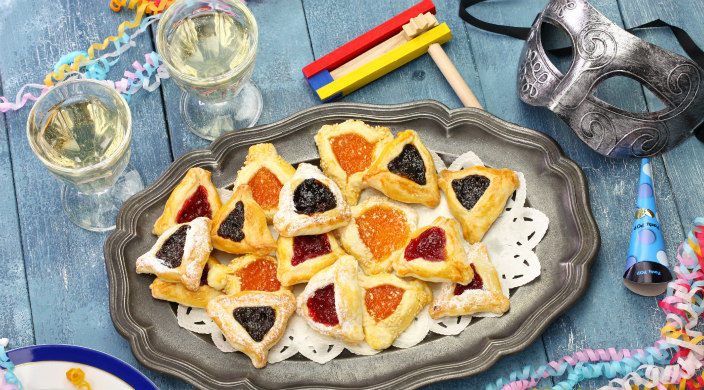 Purim is celebrated on the 14th of Adar (usually in March, sometimes at the end of February) and comes from the Book of Esther. A Persian girl named Esther becomes part of King Ahasuerus’s harem, and later his Queen, although he is unaware that she is Jewish. The King’s power-hungry advisor Haman plots revenge against the Jewish people as a way of getting back at Esther’s cousin Mordecai who would not bow down to him. Esther steps in to plead her case; the King listens, appoints Mordecai his prime minister, allows the Jews to defend themselves, and Haman is sent to the gallows.

One of the dictates of Purim is that we are meant to listen to its story (“The Megillah”) being read. The Book of Esther is the only book of the Bible that doesn’t mention God. Instead, humanity must save itself. As such, in the third century, Rabbi Joshua ben Levi dictated that not only men should attend the reading of the Megillah but that women were obligated to hear it as well since it was a woman who delivered the Jewish people into safety.

Over the years, the reading of The Megillah has turned into one of the most festive days in the Jewish calendar. This partially stems from the saying of the Talmud (Meg. 7b) that one should drink on Purim until he can no longer distinguish "Cursed be Haman" from "Blessed be Mordechai."

Adding to the merriment, noisemakers (“groggers”) are in full force to block out the sound of Haman’s name. This tradition is traced back to the 13th century when French and German rabbis took to writing Haman’s name on two stones, knocking them together to make noise and physically rub off the text. Costumes and masks are also worn to mirror the many instances of mistaken identities that appear in the story of Esther as well as the “hidden face” of God directing the salvation of the Jewish people.

The Book of Esther also suggests that gifts of food (“Mishloach Manot”) are given to friends and the poor. Even those who have very little are meant to share with two other people. The traditional gift is, of course, hamantaschen, triangular-shaped cookies that mirror the shape of Haman’s hat.

In honor of Esther, who stood up for her community when they were in danger, brainstorm with the sisterhood ways that you could help a community in trouble: organize a food drive for a local homeless shelter or get a group together to write letters to Congress in support of legislation that defends women’s rights; see what you can come up with!