In 2013, WRJ celebrated 100 years since its inception in 1913. Festivities, which were overseen by a WRJ Board committee led by WRJ Centennial Chair Rosanne M. Selfon and WRJ Centennial Co-Chair Diane Kaplan, kicked off in January at the WRJ Fried Leadership Conference (FLC) 2013 in Cincinnati, OH: the birthplace of WRJ and Reform Judaism in the United States.

Attendees learned about their past and looked towards the future as they visited the American Jewish Archives (AJA), Hebrew Union College-Jewish Institute of Religion (HUC-JIR), and the historic Plum Street Temple, and heard a keynote address from The Wexner Foundation President Rabbi B. Elka Abrahamson. It was also during WRJ FLC that attendees recorded the specially-commissioned WRJ Centennial anthem, Limdu Heiteiv, with singer/songwriter Beth Schafer and got a first look at the latest volume in the WRJ Covenant book series, Covenant of the Generations, which contains reflections, poems, and prayers written by women for women.

During this year, each sisterhood also named one woman to serve in an invaluable role as a WRJ Centennial Ambassador. These leaders helped their sisterhoods celebrate WRJ’s Centennial in a myriad of ways, including participating in the permanent WRJ Centennial Collection at the AJA, which contained a set of WRJ Centennial posters showcasing the work of WRJ and Reform women throughout the years; sharing their sisterhoods’ cookbooks to create a Centennial Salute to the WRJ Cookbook Collection; working within their sisterhoods to honor Centennial “Unsung Heroines;” and helping circulate the weekly ReformJudaism.org “Ten Minutes of Torah” devoted to highlighting WRJ’s wide impact.

In March, utilizing special services created by a team of three WRJ leaders and their Rabbi daughters, sisterhood, and women’s groups around the world held WRJ Centennial Shabbats in their congregations as a time to reflect on and celebrate WRJ’s history. Also available for use during these special Shabbat services were 12 WRJ Centennial Divrei Torah, written by WRJ Executive Committee member Cynthia Roosth Wolf, which celebrated women of our ancestral and organizational past, the core values and successes of NFTS/WRJ, and the unique qualities of womankind.

Also, in March, WRJ members journeyed to Israel and Berlin for 12 days to connect with Reform/Progressive Jewish leaders and leaders of social change, meet with rabbinical students, and see firsthand the important role that WRJ has played in the Reform Movement worldwide. While in Israel, the women celebrated Rosh Chodesh Nisan with the Women of the Wall, welcomed Shabbat in the Negev desert, and traveled to the Nalaga’at Theater, a premier spa, Jerusalem’s Old City, the Western Wall Tunnels, and the Museum on the Seam. In Berlin, the group visited the Jewish Museum and climbed the Reichstag dome.

In June, the WRJ Centennial Symposium was held in New York as an opportunity to celebrate the upcoming release of Sisterhood: A Centennial History of Women of Reform Judaism and for the Jewish scholars who contributed to it to share their research on a century of organized women in Reform Judaism. Presenters included keynote speaker Dr. Jonathan D. Sarna, Chief Historian of the new National Museum of American Jewish History and Joseph H. & Belle R. Braun Professor of American Jewish History at Brandeis University; Dr. Gary P. Zola of the American Jewish Archives and HUC-JIR; and WRJ Centennial Celebration/HUC-JIR Essay Contest winner and HUC-JIR New York student Jodie Gordon (whose essay was later published in the WRJ Centennial Journal).

WRJ held its concluding Centennial Celebration in December at the WRJ Assembly 2013 in San Diego, CA, which coincided with the URJ Biennial and featured workshops on a variety of topics important to Reform Jewish women, including sisterhood budgeting and finance, WRJ Or Ami award-winning programs, social media, membership, women’s spirituality, and social action. There were also forums, receptions, keynote speakers, and ample opportunities to socialize and celebrate, including schmoozes, music festivals, choir performances, poetry/story slams, and joyous worship/Shabbat services. The WRJ Assembly also celebrated the release of the Sisterhood Book; the WRJ Centennial CD, a compilation of Jewish music by favorite Jewish artists that included Limdu Heiteiv; the WRJ Centennial Journal, which documented 100 years of WRJ history and development in the Reform Movement and around the world; and the WRJ Centennial Video. Centennial sisterhoods, sisterhoods celebrating their 100th anniversary, were also recognized. The Assembly and Centennial were then capped off with a Reform Movement-wide celebration in honor of WRJ and its history of “extraordinary women shaping Reform Judaism,” during which WRJ was presented with the URJ Maurice N. Eisendrath “Bearer of Light” Awards.

"One hundred years to live, to learn, to grow. Every moment we make history as we lead with openness... Women of Reform Judaism. Our Hearts keep their promises. Generations support each other, inspired and strengthened as they grow. Stronger together... 100 years." 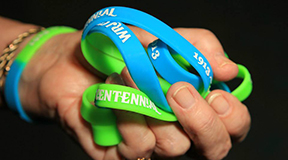